Streams of magic still flow through our mundane human realm.  Case in point:  I was standing on our high deck gazing down when I noticed a wild tom turkey strolling through our yard. Normally, this is not so unusual, as we are often visited by travelling turkeys. However, something about this fellow was different . . . magical . . for as he strutted by with this tail feathers fanned out behind him and his wings spread wide, he looked up and winked at me!

I had never had a turkey wink at me before. I blinked my eyes, feeling the second sight slip into place. I looked again and realized the supposed turkey was actually a red-haired, red-bearded gnome wearing a peaked red hat. The gnome man’s upper body was turned towards me. He held three turkey feathers in his hand before his face. The gnome man grinned at me and, with a final nod, continued on his way into the neighbor’s yard.

Magic is everywhere, waiting to be noticed if we but care to look for it. 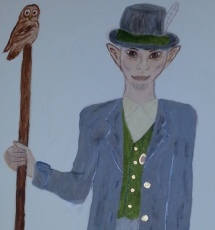